Born in Bombay, (Mumbai) India, Suneeta Vaswani emigrated to the U. S. in 1977. Concurrent with the move, Suneeta gave up a thriving indoor landscaping business and shifted her areas of interests from teaching Bonsai and Ikebana to teaching Indian cuisine. Suneeta was active in the Houston culinary scene and has a wide range of teaching experience. She has been featured in several prestigious publications, was a member of International Association of Culinary Professionals (IACP) and of Houston Culinary Guild. She was recognized as the leading Houston authority on Indian cuisine. Her first cookbook 'Easy Indian Cooking' was published in early 2004 and the second, The Complete Book of Indian Cooking in 2007. Highlights of her work are summarized below: 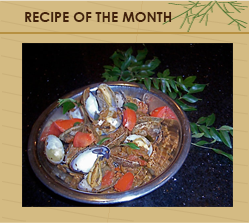 I wanted to write and say how much I enjoyed your curry workshop last night at In Good Taste in Portland. It was FANTASTIC!! I have a much richer understanding of Indian spices, regional differences and cooking techniquies. I am very excited to try more dishes at home. The historical information added a real richness to the class.I would love a class on a traditional Indian meal start to finish.