Written for the newbie to Indian cooking as well as those comfortable in the kitchen, this is a treasure for young people who grew up savoring mom's home cooking and who, though familiar with authentic flavors, have no means of duplicating them in their kitchens. Detailed instructions along with precise measurements make this a must have cookbook for easy authentic family style recipes. You'll find more than 130 recipes that are easy for beginners to make while also appealing to experienced home cooks.

Experience the wonders of Indian cooking and culture

Regional foods tend to be distinctive, influenced by local ingredients, and Indian cuisine is certainly no exception. India's sheer size and geography, coupled with the impact of history and religion, have spurred the development of a unique cuisine.

In the COMPLETE BOOK OF INDIAN COOKING, you'll discover user-friendly recipes that work well, taste incredible and introduce you to Indian culture. Each recipe contains background information so that you may become more knowledgeable about Indian food.

Hundreds of exotic yet easy recipes, categorized by region, await you:

In addition to all the regional foods, the book features chaat —
the wildly popular street food of India. 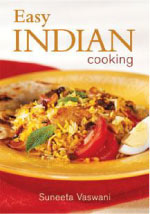 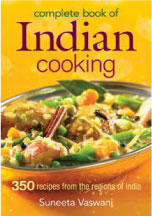 Regional foods around the world tend to be distinctive and influenced by local ingredients. In India, the size and geography of the country, coupled with the impact of history and religion, have accentuated this distinctiveness. The vast and ancient land of India is almost a continent in itself. With more than one billion inhabitants of multiple ethnic backgrounds, it is no surprise that the diversity of its cuisine is equally staggering.
Read more >>

The purpose of the Complete Book of Indian Cooking is to illustrate the differences and similarities between Indian regional foods. Although spices are the common denominator, the way they are used is vastly different in each area. That, combined with local ingredients and religious beliefs, means a distinctive cuisine exists in every part of the country. And there are other differences. In general, the north has a grain-based diet of wheat, millet and sorghum, but rice is not the main event as it is in the south, which is almost 100 percent rice-based. In North India, pan-frying is a common cooking method, while in the south, steaming is a much-used method. Generally, gravies (curry sauces) in North India are thicker, with a base of onions, tomatoes, puréed nuts, puréed lentils and, occasionally, cream. Southern cooks use coconut milk and tamarind in their dishes. The gravies are light and broth-like, which is one of the reasons why the cuisine of the south has not become as popular in North America. The soupy dals are too thin and watery for the non-Indian palate and would qualify as soups rather than main courses. The other issue is rice served in multiple courses, which, again, is too repetitive for non-Indians. The exception is dosa(crêpes), made of a light rice-and-lentil batter, which are extremely flavorful when eaten with just a smattering of lightly spiced potatoes and coconut chutney. The food of the eastern regions, too, is rice-based. The diet is also rich in fish and seafood, except in the far northeastern states, where pork is the main protein and seasonings tend to be very simple, devoid of oil and spices. The western states share many commonalities with the north, but each has a distinctive cuisine. Rice, a variety of grains, goat, poultry and seafood along the coast — usually cooked with a plethora of spices and using a variety of different cooking techniques — are common to all these states.

My interest in food, which began when I was a young homemaker trying to be a good housewife and mother many decades ago, has developed into a passion, as has my interest in the background and evolution of Indian cuisine. As I delved into the foods of India, partly out of curiosity but mostly to research the antecedents of particular recipes, I became aware of the many differences in the way spices and other ingredients are used in different regions. This, coupled with the fact that there are regional vegetables, fruits, herbs and oils (to mention just a few points of difference), led me to believe the time was right to introduce more people to the richness and diversity of the regional foods of India.

Both books are available on Flipkart.com and Amazon.com

I wanted to write and say how much I enjoyed your curry workshop last night at In Good Taste in Portland. It was FANTASTIC!! I have a much richer understanding of Indian spices, regional differences and cooking techniquies. I am very excited to try more dishes at home. The historical information added a real richness to the class.I would love a class on a traditional Indian meal start to finish.